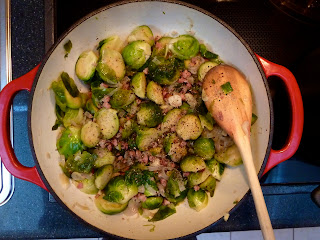 I hope you all had a wonderful Thanksgiving. Mine was great, filled with amazing food and even more amazing friends. It's hard to cook for 19 people, especially in a tiny kitchen, but with my mom's help and two days worth the cooking we managed to serve a turkey meal that everyone enjoyed. Company, of course, was lovely too and it was a pleasure to see everyone loving the food so much.

The turkey is all gone. All of it. And so are most of the side dishes, except for the stuffings (but that's not a problem. I love stuffing.) I was afraid Brussels sprouts were not going to be overly popular because, let's be honest, they usually aren't. But dressed up with pancetta, shallots and garlic they were much better than usual... they actually had flavor, which isn't their strong suit. Pancetta makes everything better in my opinion, kind of like butter. So if you are wondering how to make Brussels sprouts that don't suck... here's the recipe, adapted from Cooking Light, the November issue. 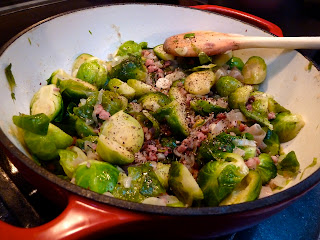 BRUSSELS SPROUTS WITH PANCETTA AND SHALLOTS