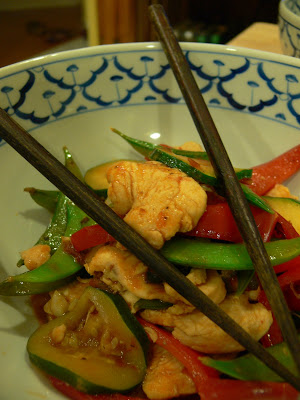 Wow, that is one long title... I thought about calling it "Chinese stir fry", but then again, other than the chili black bean sauce it doesn't have much Chinese in it. It was an attempt to reproduce the heavenly flavors of a dish I ate at Charlie Chiang's a couple of weeks ago, an attempt that failed, but while failing it produced a pretty delicious dinner. The chili black bean sauce is not hard to find -Asian grocery stores carry it, and if Naples, Fla. has an Asian grocery store I expect pretty much every city and town to have one as well.

Place chicken in a bowl and sprinkle with one tablespoon of cornstarch. Stir and set aside.

In a small bowl mix the broth, soy sauce, chili black bean sauce and one tablespoon of cornstarch. Stir to mix well.

Heat a wok on medium high heat, swirl in sesame oil and add the chicken, stir frying for a couple of minutes or until it changes color. Lower heat and add zucchini, snow peas, bell pepper. Season with a dash of soy sauce and cook until vegetables are crisp tender.

Add broth concoction to wok and cook for another couple of minutes, stirring constantly, until sauce is thickened and bubbly. Sprinkle with scallions and serve immediately.
Cooked by Chiara "Kika" Assi at 9:57 AM