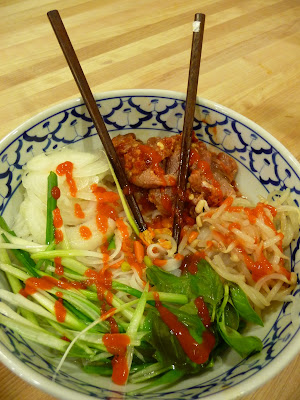 For those of you who don't know it yet, I am a restaurant critic. I literally eat (and write about it) for a living which yes, is cool as hell. The coolest thing -other than the newspaper paying for my meals- is getting to try new cuisines and restaurants and, although Naples doesn't really offer anything too crazy, lately a bunch of ethnic restaurants have opened and most of them have become my favorites. Case in point: a little place called Noodle Saigon, responsible for introducing me to the delicious, heavenly pho.
Pho isn't just a Vietnamese soup. Pho is the national dish of Vietnam and it's such a satisfying yet simple dish I could easily eat it every day. Star anise, cinnamon, chiles... I had to have a recipe. So I bought a Vietnamese cook book and have been made my own pho ever since. I make it extremly spicy, but that's just me. If you don't want it too spicy don't marinate the meat in chili garlic sauce and go easy on the siracha.

For broth:
1 qt. water
2 beef buillion cubes
2 pho bo cubes (if you can't find them at the Asian store use one more beef cube instead)
6 pieces of star anise
2 sticks of cinnamon

Combine all ingredients and simmer for 20 minutes. When the broth is ready keep it warm but not boiling. Fish the solids out and discard them.

Other ingredients:
Rice noodles (medium size). I use 1 package (1 pound) for 4 people.
1 onion, thinly sliced
1 can of bean sprouts, drained
a bunch of basil, chopped
a bunch of cilantro, chopped
2 small Thai peppers per person, chopped (or less if they are too spicy to handle)
10 green onions, chopped
1 1/2 lbs beef tenderloin, thinly sliced

After you prepare the broth, soak the noodles in it for about 10 minutes or until ready. Be careful because they overcook easily.

In the mean time, chop and prepare all the other ingredients.

When the noodles are ready place them in 4 bowls. Put the broth back on the stove and bring it to a boil. In the mean time put meat, vegetables and herbs in each bowl over the noodles. When the broth is very hot pour some into each bowl. The meat will begin to cook immediately and will be ready to eat in 2 minutes. Serve with extra sauces on the side.
Cooked by Chiara "Kika" Assi at 10:17 AM